On the Show and Tell of the Harvey Disaster Area that the POTUS was given Saturday, he deigned to visit a church in Pearland (First Church of Pearland) where relief supplies were being distributed, and if you’ve been following the news, you’ll have seen him speechifying there, and otherwise photo opting.

The thing is, in order for the POTUS to get there, he had to travel over ground that has a long history in my family (significant bits of which used to belong to my family, in fact). 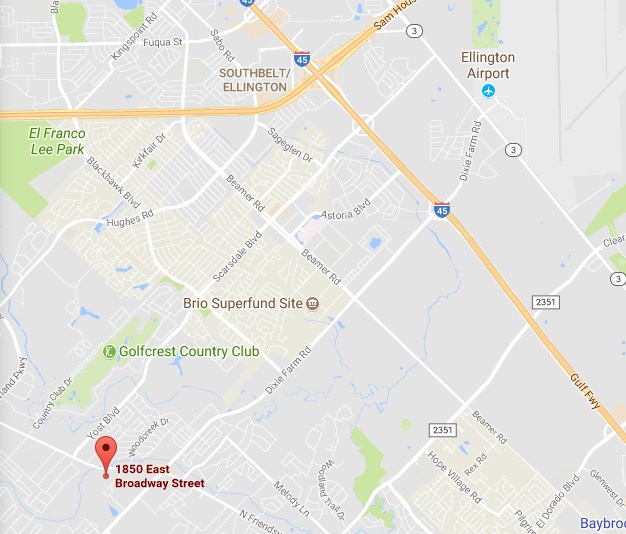 Air Force One landed at Ellington Airport, the presidential motorcade apparently came up the Dixie Farm Road to get to the church (red tag), and then went back out to Ellington Airport via Yost Boulevard.

At one point, my mom’s three oldest brothers leased the Dixie Farm (for which the road was named) where they grew magnolia figs.  East Broadway, where the church is, used to be the Friendswood Highway which is how we used to get to Yost “Boulevard” from Houston back in the 1950’s when it was a dirt road paved with oyster shells way out in the country and every house on that road was the home of someone in my mom’s family.  Her 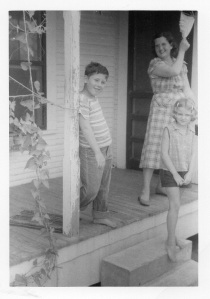 second oldest sister VY lived in a white frame (1) house at the northwest corner of the T-intersection (the house is not there any more).

Her youngest sister EW lived in this little 4-room house built in the 1930’s (below) (2), which is dwarfed by the $2 and $3 million dollar homes around it.  That’s my dad on his way in to visit my aunt in 2009.  Time has taken both of them away in the years since.  The only reason her house is still there is because my aunt befriended her neighbor’s autistic son and he spent a great deal of time with her and grew to love the house.  After she had to go to a nursing home, they bought her house for him as a “retreat.”

Further down the road was my grandma’s house (3) (above left with her daughter VY, VY’s daughter C, and nephew JCJ on the front porch) where my mother was born in 1924 (that house is no longer there).  That’s my grandma at far right with her 12 children in age order R to L (far left is mom, 3rd from left is HJ, 6th from left is EW, 7th from left is VY).  Her eldest son has a middle school named after him.   Down at the end of the road, where it dead ended was my mom’s brother HJ’s place.  It was a little wood frame house (no longer there) set in the pine trees far back from the road with a barn, and his wonderful grove of satsuma orange trees.

My uncle HJ later built a larger house (4) closer to the road, and eventually sold his orange grove when he could no longer work in it.  The patch of trees to the left in this photo is where my grandma’s house once stood.  Behind all these lovely homes runs Clear Creek, where my mom once played and chased cows.

The house (5) (at right) in the video below now stands where my uncle’s satsuma orange grove used to be and is two houses down from the new house my uncle HJ built.   You will note the name of the poster of the video below, who is one of “those” Yosts (great great grandson) for whom the road was named. One of those black SUV’s has the POTUS in it, but naturally the Secret Service has seen to it that it’s impossible to tell which one.

Life on Yost Road used to be a lot simpler.