been interesting weather.  We got ice pellets, had thundersnow, rain, and the world was coated with ice this morning.  I could hear the pellets of ice hitting the window screen last night when I was at the computer.  It thundered several times last night, too, and once there was this terrifically loud BANG!! which was probably a utilities transformer going kablooie.   The lights have been flickering from time to time.  As much ice as there is on everything, including trees, I’m not surprised.  What is surprising is that I haven’t had a sustained power loss yet. (Touch wood!)

We have a unique electric utility situation here.  For years and years, we had two power companies, a large, multistate private power company and a municiple utility company, competing for the same customer base, each with its own duplicate infrastructure, generator stations, etc.  People could choose which service they wanted to take from.  Then, about 15-20 years ago, the private utility company was bought out by Excel Energy and in the corporate restructuring, they

Just now, the lady in “B” called to tell me there was a branch that had broken off the stupid locust tree in my back yard.  It was hung up on the fence and the big end of it was hitting up against my cable wire.  But, it was wedged in between the fence pickets so tightly that she couldn’t maneuver it out by herself.  Actually, the  smaller branchings of it were straddling the fence, with most of them on my side.  I went into the back yard to see if we could get it loose/down so it wasn’t hitting  my cable “war.”  We managed to get the branch loose.  It was easiest to push it over into her yard, so that’s what we did.   There’s my excitement for the day.

The weather has warmed up enough that we’re melting now. Everything is dripping, and the ice that had coated the trees and wires is falling off in large chunks with every breath of wind.  it’s all over the yard.  Now and again I hear the Whump! of a wad of icicles falling off the eaves.

I’ve taken a viewer’s suggestion and scoped out some Bluetooth earbuds.  So now I’ll have to get one of those wireless charger disk doodads, too, but they’ll have to come out of next month’s budget.  Sigh.  I hate the shape of the corded iBuds that came with the iPhone.  They won’t stay in my ears worth beans.  The proposed Bluetooth earbuds are the kind that work best for me. The trick will be keeping them charged.  Now, if they could just make a wireless charger that works on people. . . . 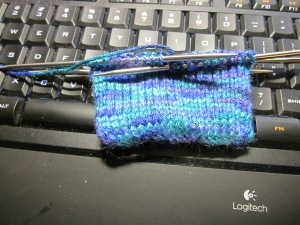 The majority of my slacks have pockets, but most of their pockets are too shallow for an iPhone to fit into.  (Since iPhones first came out in 2007, that tells you what a clothes horse I’m not.)  When I go to cardiac rehab sessions, the car keys and the iPhone go in my pockets, and my purse gets locked in the trunk (boot) of my car. 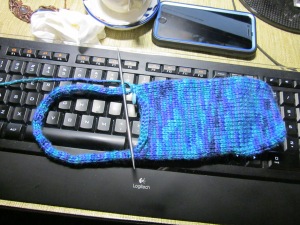 Last night I got a wild hare to knit me an iPouch to hang around my neck so I will have a place to carry my iPhone when I wear slacks with unsuitable or no pockets.  I’m knitting it bottom-up using Turkish cast on (like you do with toe-up socks) to avoid having to Kitchener stitch the bottom closed.  Guess what the stitch is called that produces that long tail — it’s the iCord stitch.  Really.   I’ve still got about 10 inches of iCord left to knit.    It’s a really simple little pattern using not a whole lot of worsted yarn — You may recognize the color.  It’s an oddball I had left over from The Assassin’s Daughter shawl.  I like the way the colors are pooling

Everybody keeps saying that the iPhone is so intuitive.  How neurotypical of them.  My experience has been that it’s frustrating and counterintuitive  to the point that it causes me to iSwear.