To put things in context, my city is at the same latitude as Casablanca, Morocco, which sits at the edge of the Sahara Desert, and we are about 600 miles north-northwest of the Gulf of Mexico (the source of the Gulf Stream, which is what keeps Britain from having the same climate as Maine, Quebec and Newfoundland ).  We’re pretty much the buffer zone between the furthest reaches of the cold weather that sweeps down the Great Plains unopposed and unobstructed from Canada (“Ain’t but one fence between us and Canada, and it’s down. . .”) and the hot humid mess that is the Gulf Coast.  One peek at our average rainfall (16 inches/46.6 cm) and average humidity (44%) will tell you we don’t get much of that hot humid mess up here, which is just as swell. . .  Our climate is classed as “semi-arid” which is to say, on the hot, dry side.  Such cold weather is not unusual for us.  We’re used to crashy-bangy thunderstorms with torrential rain and hail.  However, we are not used to snow. 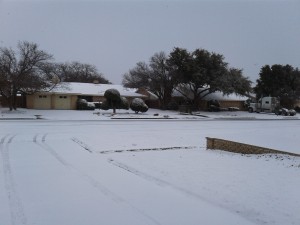 Naturally, I had to get out in it.  I had to be at the VA clinic at 8 o’clock for lab tests, and had an appointment at 11 o’clock to see my primary care provider for my yearly health check and — most importantly — to get all my prescriptions renewed for 2020. By the time I was ready to leave, it was actively snowing, big wet flakes.  Fortunately, I didn’t have that far to go to get home, and I made it home upright and in one piece.  Thankfully, I don’t have to stir until Monday, when I have another doctor’s appointment.

I’m also pretty popular with my dentist right now, too.  We were “waiting for the bone graft to take” that was placed in the socket of the molar that  I had pulled last year, which takes 4-6 months.  It is the “middle” molar that was pulled, the one next to the (impacted) wisdom tooth I haven’t had since February 20, 1962.  My mom has large teeth and a large jaw structure, as normal Human size distribution goes, and my dad had small teeth and a small jaw structure.  Wouldn’t you know, both my brother and I inherited my dad’s jaw and my mom’s teeth.  Apparently that size mismatch affects how much clearance there is between my upper and lower front teeth when I open my jaw as wide as I can.  (I can get it open wide enough to get a foot in, but apparently that’s not wide enough!)  My dentist is concerned he might not be able to get the gear into my mouth that he needs to be able to set the post down into the bone for the tooth implant, which I very much want.  I only had 3 working sets of molars (top and bottom) coming into this process.  Now I’m down to 2 sets.   The dentist has made a “mouth guard” sort of thingy which I’m supposed to wear at all times, except when eating, with the aim of getting some slack in my jaw muscles and hopefully gaining enough clearance to proceed with the implant process.  I have to go see the dentist again next week.

In the knitting news, I’m on the fifth skein for my “Assassin’s Daughter’s” Shawl.  I may go ahead and provisionally bind it off to see if I need to add the 6th and 7th skein, or if five will be enough.   Time will tell.