First time in a while that my mom has cooked for Xmas. (Friends keep inviting us over.)  Her stock broker always sends a ham for the holidays, and she put the tree up one last time.  It’s shorter than usual because last year, a while after all the other Xmas decorations got put up in the attic she found this piece of pipe, didn’t realize what it was (part of the central stem of the tree) and threw it out.   But then, the whole tree is easier to reach now. . .

We had dear friends AS and LR over for Xmas dinner.  AS and his late wife and their two girls are long time friends of our family.  My folks were “third grandparents” to their girls (who are now both married and have children of their own). Both he and LR are involved in the Music Department at Texas Tech University (percussion).  We ate in the living room on the “good” mahogany table and chairs my folks bought in 1947, the first year of their marriage. (The dining set  that has chairs that don’t desperately need to be reglued* like the one in the den.)  We ate under the crysyal chandelier my dad also put in.  It was lovely.

My mom put up her giant economy size manger scene again this year on the mantle that my dad both built and carved way back in the early 1970s, just after they bought the house.  The manger set figurines are all ceramic.  Back when one of our family friends had a ceramic business out of her house, my mom cleaned all the greenware, painted them and had her fire them.  It has shepherds, kings, sheep and camels, as well as a two-piece babe and manger.  She did an exquisite job. (She had the manger set finished before my dad got the mantle finished. . . )

The lady, JM, who lives across the street and who puts my mom’s paper up on the porch every morning of the world has been diagnosed with colon cancer.  This has been a hard blow for my mom.  This is the lady who helps my mom out with things like putting up her Christmas lights and getting things down from and putting them back up into the attic and all the other stuff I used to do for her until my knee problems.  JM is going to have to have chemotherapy, radiation therapy and then they’ll do surgery.  Just judging from the treatment regimen they have planned, these next couple of years are going to be pretty tough for her.  She is such a lovely lady and  has been so good to my mom over the years, and mom and I are pretty upset about the situation.

The elderly Hispanic man (widower) who lived next door to my mom died about a month ago; the house is vacant, and I expect it will be sold.  We will hope whoever buys it intends to live in it rather than rent it out.

I treated myself to a new monitor for Xmas.  It’s another Acer just like the other one I got last summer, so I no longer have one bigger monitor and one smaller one, but two the same size.  The color is better than on the one I replaced, also.  I had to reconfigure the arrangement of stuff on the desk slightly, but it works out just fine. 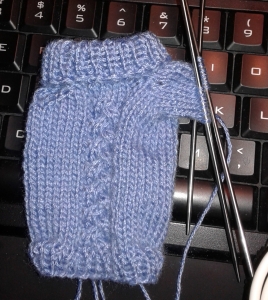 In the knitting news, I’m working on the test knit for the ball-jointed doll sweater.  I’m doing it in cotton thread and it’s coming along.  Just the sleeves left to do.  I’ll do a hat to match like I did on the other one.  Then Wishu will finally get his sweaters.  Once I get the pattern proofed, I’ll put it on my knitting patterns blog.

I’m doing another Foreigner reread.  If you are not familiar with the series and like SciFi, especially one with a very well imagined alien world/culture, check this series out.  The 20th book in the series comes out January 7th, and I’m eagerly awaiting it.  The 21st book is in the process of being written.  This is probably the fourth time I’ve reread the series, and it stands the test of time.  I get new insights and notice new things every time I reread them.  I’m on the fifth Foreigner book in my reread.

One thought on “Tiptoeing Quietly Into A New Year”