Went to visit my friend LB again yesterday.  It seems any more that I only have enough spoons to do one major thing a day, like go to a physical therapy session, or do the hobbit journey (park in the parking garage, hike to the elevator to get to the 3rd floor sky bridge, hike across the L- shaped sky bridge that goes over the street and halfway up the block, take the elevator down to the first floor, hike around to the south tower elevator to go up to the 8th floor, hike halfway down a very long hall to my friend’s room, and then retrace the epic journey to return home) that is visiting my friend in the hospital.  She has gotten the NG tube out of her nose and is actually eating now.  There has been talk that she may be going home in a couple of days.  She talked about being able to come over and watch “Good Omens” (I have Amazon Prime, they don’t).

As arduous a journey as it is, I notice I’m walking faster and limping a little bit less.  My new knee is still stiff, and there is still significant swelling in and around the joint, sometimes more, sometimes less, depending on the time of day and my activity level.  They say that could take up to a year to completely go away.  But the big thing is, stiffness doesn’t hurt.  I can bear weight on that knee — stand on it, walk on it — and there is no pain.  This is such a big deal.  Yeah, it still aches and pains  when I move it in certain ways or try to bend it farther than the swelling will allow, but that’s getting less and less as time goes on.

The other day, mom and I talked about going to Pearland “one last time” (I cringe when she says it).  We’ll be driving down in late October to attend the annual big deal meeting of the Pearland Historical Society, visit rellies hand over fist and otherwise see everybody down there.  That’s where my mom grew up and where most of her relatives who are still alive still live.  None of her brothers or sisters is still living, but

there are still some nieces and nephews, and “grands” by the dozens.  One of my dad’s nieces still lives in the area, and hopefully we’ll get to see them too.  Mom is the only surviving member of her high school graduating class (of 14).

You’d never guess to look at her that she’s 95.  She gets around better than I do at the moment, and not only has all her marbles, but knows what to do with them.  That’s her at left with the mayor of Pearland.  (He’s older than she is!)

Predictably, my July electricity bill was higher than giraffe’s ears.  The August one, I’m afraid, will be higher than that.  We’re already had a couple of 100+ F /37.7+ C days, and we’re heading for about four more come the end of next week.  My response to temperatures like that is to stay in out of it as much as possible. 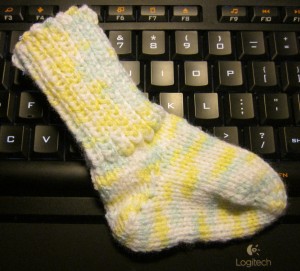 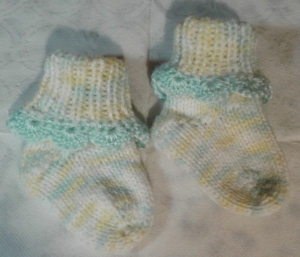 In the knitting news, sometimes you knit things just because you want to knit that thing.  The excuse comes after the fact.