Pushing the rock up the hill again,  which is what rehab is feeling like.   I rehab-ed this knee after I broke the kneecap and had it surgically reassembled with a set of K-wires and a figure-of-8 cerclage wire and had to do a month in a knee immobilizer and wait for the bone to heal.  Then I rehab-ed it again after I had to have the hardware taken out because one of the K-wires twisted out of position.  Very safe bet that this injury and the subsequent surgeries set up the cartilage loss that led to my replacement surgery.  Now I’m rehabing following total knee replacement.  Hopefully the third time is charmed.   I am making progress.  I’ve gone from 82 degrees of flexion to 114 degrees of flexion (with a straight leg representing 0 degrees).

Monday, I went back to my orthopod and he was pleased with my progress.  Then I went hiking at Wal-Mart, came home, put all my groceries away, crashed and burned.  Was in bed by 8 p.m. While I was at Wal-Mart, I got a 17-oz stainless steel (double walled so it won’t sweat all over the place) water bottle that will fit in my bag. I made sure to get one with a neck big enough to fit ice cubes in.  I tested it today and it worked great.   (iced Peach Mango Crystal Light — Nums!) A high of over 100 F/37.7 C tomorrow and Thursday, which is going to be the first time our high has not been in the 90’s in weeks.  Humidity has been around 35%.

Today I went to therapy and then got my hair trimmed.  I’m trying to get it all one length again and am letting it grow out, but I get split ends so bad I have to have it trimmed regularly.  It’s grown out even more insistently curly than it was before I lost great wads of it from chemo last year.  Apparently, I’m going to be sporting a dandelion clock do until it grows out long enough to put back.  After I got my hair cut, I went to Market Street to get the things Wal-Mart doesn’t have.   (Rosemary olive bread, for one thing. . .)

Last Tuesday, was the appointment that TriWest (VA) got me with an optometrist to have my eyes examined and I got a new prescription for glasses.  Now I’ve got to call the VA and find out the hours the VA’s “optical shop” is open so I can turn in my prescription and get new glasses made.  Manaña.

Here follows the obligatory Who reference.  Depressingly, the lyrics are as relevant today as they were when the song was released in June of 1971.

In the knitting news, I have two finished objects (FO’s)

A sparkly little baby beanie and a pair of baby booties.  They’re not cute or fancy booties, but with the ribbed cuff folded down once, they stay on. 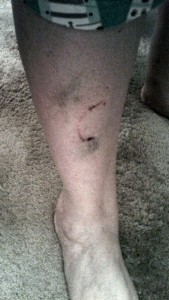 So, after I got home from my errands this afternoon and was changing out of my slacks and into the cotton sleep shirt I wear around the house, I looked down and saw this:

It’s my right leg, and I’ve got bloody scratches as well as a pair of stonking great bruises, and no idea when I done the deed, never mind what deed I dood.  You’d think if I whacked my shin hard enough to raise bruises like that, I’d remember doing it.  No clue.  About a week ago I had this spectacular bruise on my forearm and no idea how it got there, either.  I mean, I’m not in the habit of pinballing off the walls or tripping over the furniture or anything.  Sigh.  Welcome to the wonderful world of blood thinners.