Mr. Penumbra’s 24-hour Bookstore by Robin Sloan, to be exact.  Not because of anything in the book — or at least not anything so far.  I’m only about halfway through it.  It’s a delightful little book peopled by an interesting cast of characters.  No.  It’s what’s on the book. The stylized design of books on shelves on the cover fluoresces a bright highlighter yellow in the dark! I read a chapter or two, put the book on my bedside table, turned out the light and … whoa!  It glowed so brightly

I had to put the book in my “office” so I could get to sleep.

It’s Pinktober, breast cancer awareness month, and I’ve started another Carrie Fisher Memorial PussyHat in honor of it. I’ll probably do a couple more pink hats of various styles, but I need to finish the Monmouth hat and whatever other style of hat I decide to make out of the last of the Dazzle yarn I was gifted with by the lady who donated a large portion of her late mother’s yarn stash to the group, so I can wash them all at the same time and treat them with hair conditioner to soften them up.

I finished another Coriolis chemo hat, and played yarn chicken through the whole hat.  I did have enough yarn to finish it, with a ball about an inch in diameter left over.   The pattern makes a really nice had for being no more complicated than it is.  The yarn is that Red Heart Unforgettable in the colorway “Dragonfly.”

Here it is finished from the side and from the top.  So swirly. 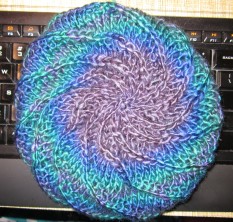 The lady who donated the Dazzle yarn also donated an assorted bunch of knitting needles, from which I got several incomplete double pointed sets.  The double pointed needles usually come in sets of 5, but if you can get four, that’s enough to work with.

Last week, one of my paternal cousins had her second hip replacement surgery in two weeks. (They did one hip and then two weeks later did the other one).  It was a “same day surgery” — which is to say, they let her go home the day of the surgery.  It’s a new thing.  In order to be able to have this procedure, you have to be otherwise in good health and a low surgical risk.  You have to do “pre-hab” before surgery, and learn all the rehab exercises you’ll do following surgery, and in order to go home, you have to get up, walk, and be able to walk and climb a short flight of stairs. She’s been doing really well.  The thing is, she’s about 14 years younger than I am.  Still, if your joints are in such bad shape, especially your hips, that a doctor recommends joint replacement surgery, you probably should have it done.   Hopefully, we’re going to get to see her later this month

3 thoughts on “Kept Awake by a Book”