Actually, it started raining Sunday and has been raining off and on since then — like, an hour or so of just bucketing down, followed by hours of light sprinkling or mizzling followed by a couple of hours of glowering clouds, and so forth. It’s supposed to be like this all week.  It’s not unexpected.  It “always” rains here during the South Plains Fair, so that the dirt parking lots and dirt fairgrounds can become a goopy mess.  Also they’re gearing up to start stripping cotton, which they can’t do till the fields (and cotton) dries out. One good thing, though; the rain has washed all the ragweed pollen out of the air.

This is the flatlands, remember, so when it rains, water fills the slightest depression till it overflows.  It’ll rain like the dickens for about an hour, water will collect in all the street gutters and at the intersections to about 12-18 inches deep (which means the lanes of traffic closest to the curb/kerb are virtually unusable due to standing water covering most of the lane), and the pickups will just go barreling along at 40 mph like they always do, rooster-tailing great splashes of water when they hit puddles, deluging the cars on either side to the point that you can’t see out your windshield/windscreen for several seconds.  Then, an hour or two later, the water has run off through the storm drains into the numerous playa lakes in the various parks scattered about the city, and the streets are pretty clear of standing water again.   Of course, any underpasses where the roadway is below ground level quickly become impassible.

I had a checkup at the dentist’s Monday (during an interlude of raining cats and dogs), and everything looks OK.  I’m on my last day of antibiotics. I was down to 500 mg of acetaminophen four times a day on Sunday, and stopped taking it completely yesterday and haven’t needed any since.  I should get the crown — the actual tooth part — some time in January.

In the knitting news, I reworked the decreases part of the pattern for “A Little Twisted Hat” and I like it much better. 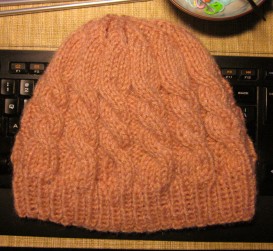 You really can’t see the changes too well.  The picture on the left is the old way, and the one on the right is the new way, but you can’t really see the changed part in the picture. — I ran out of the dark orange and had to finish with the light orange, and it doesn’t show up well.  I stopped the twisted cables three rows sooner, and did the decrease from the center of the cable, not decreasing the purl stitches til the very end so that the cable comes to a point with purls on either side.

Looks much better.  I need to make another one in a yarn I’ve got enough of to finish the hat with and take a better picture to put on the pattern.

Also, I’m down to the last ball of yarn on CJ’s shawl.  Soon as I finish it and weave in the ends, both shawls are going to be packed up ready to be mailed to Spokane, WA.  I hear the weather is starting to get cool up there and it’s finally raining some. They are knee deep in a kitchen remodel so I will probably hold off for a couple of weeks until things settle down.  I’ve already got a fair start on one for me.

One thought on “Rainy Wednesday”