Please, donate to the Red Cross.  Nobody is immune to natural disasters, and what goes around, comes around, folks.

Heard from my friend JT who lives in Key West.  They evacuated Thursday afternoon and were holed up in a hotel in Orlando for the duration.  I don’t think they thought Irma was going to track as far east as it did, and Orlando did take a hit, but not a direct hit like the Keys did.  They have the hotel room booked until Saturday.  They should be able to get back by then.  Hopefully, they will have something left to go back to.  I’ve seen footage of the damage in Key West, and it’s pretty bad.  The main thing, though, is that they’re alive and unharmed.

I got a CT of my jaw done this past Monday to see if the bone graft took where I had that lower molar pulled, and the graft has taken.  That means that on the 21st, a large gob of money will be given to my dentist to implant a peg into my jawbone.  Three months after that, he will be given an even bigger gob to put a tooth onto that peg.  I also learned that the dentist’s receptionist/clerk is pregnant with a little girl due possibly at around the first of the year by the look of her, so there will be baby things in the knitting news. 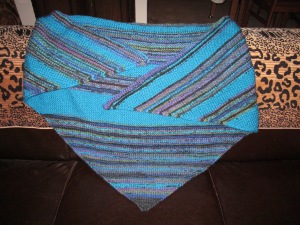 However, currently in the knitting news is that I have finished three hats and a shawl.  The shawl pattern is Malguri Morning, one of two I’m doing for friends in Washington State.  It’s done in Loops & Threads Charisma yarn, “Northern Lights” and “Electric Blue” colorways.  The other one has about a ball and a half of yarn left to go and has been bumped back in the queue again due to the fact that their kitchen is in the process of being remodeled, and BABY STUFF KNITTING! 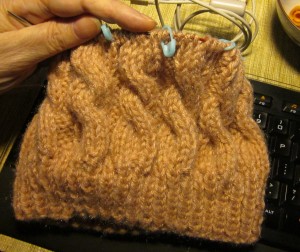 I finished two ribbed toboggans and a Simple Pleasures hat, and I am working on a new pattern I’m calling a Little Twisted Hat (at right).  I’ll post that pattern when I’ve figured out how many cable crosses are needed before the decreases can start. 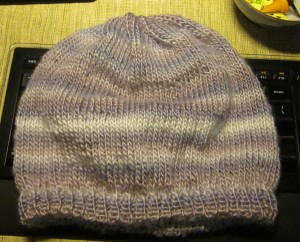 The toboggans are the ones above (camo chemo!) and the Simple Pleasures one is to the right.  I’ve got five other hats started, but two are stalled, one has to be half ripped out and rethought, and the remaining two just have to be finished.  They will be on hold, however, until I get baby stuff out of the way.  I’m going to see how many baby things I can knit between now and the 21st. They already know it’s going to be a little girl, and I have pink yarn and lavender yarn, and yellow yarn . . . I’ve also got a ChiaoGoo size US 11 (8.o mm) 60-inch circular needle on order and two big balls of a nice yellow yarn, so there may be a baby afghan at some point.  We’ll see.

2 thoughts on “Aftermaths, Dentistry, and a Baby”