To begin with, I had a hard time getting to sleep last night, and then about 4 a.m. I was rudely awakened by my tum having a ferocious argument with my supper, which supper shortly thereafter got the bum’s rush (Get out!).  I mean, I barely had time to get to the appropriate location before I was calling Huey!  I was just drifting off to sleep again at about 6 a.m when I had to get up precipitously again. (And stay out!).  I finally got to sleep again, only to be awakened at a quarter past 8 by the loud growl of a chain saw beside the house. 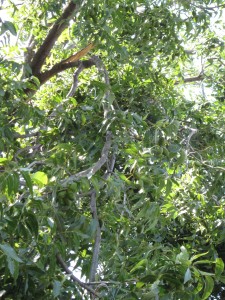 I had arranged for a tree trimming guy to come out at around 9:30 this morning to cut a half broken limb from B’s pecan tree that was dangling astride my cable wire.  I had noticed it the day before when I had a cable guy come out to try to find out why every 15-20 minutes, my TV picture would freeze and “pixelate” for a second or two, and why when I was streaming music, it would stop abruptly for a second or two. It was a sizeable branch, and if it had finished breaking it would have fallen on the cable wire from the pole to the house and knocked the wire down.  If that had happened, I would have had to pay for having it restrung — and you can bet it wouldn’t be cheap! 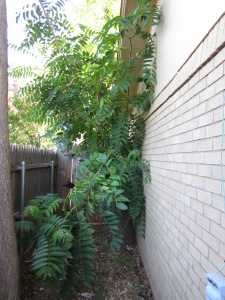 Yesterday afternoon, after the cable guy had left, I was able to sweet talk my landlady, who is really a very nice lady anyway, into springing for the cost ($350) of having the tree trimming guy come out to not just trim the dangling pecan branch, but remove the 6-foot stub of locust trunk at the side of the house that had riotously resprouted, remove the Siberian elm saplings from and trim what the landlady says is a yaupon holly (Ilex vomitoria) growing between my 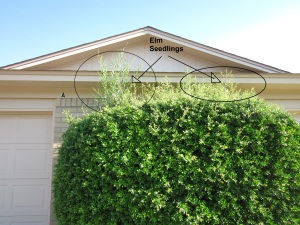 garage and B’s, but which I think is a Japanese holly (ilex crenata).  (Yaupons have red berries and this thing doesn’t.) 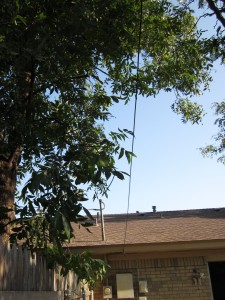 The tree trimming guy was supposed to come out at about 9:30 or 10 this morning, but he was out at 8:20 (!) sawing away on the other side of my bedroom wall, taking down the locust trunk.  He had this little chainsaw on a pole contraption that made short work, not only of removing the Branch of Damocles,  but of trimming all the branches on both B’s pecan (her yard is “squirrel heaven”) and my (#$*&%! beans which nothing 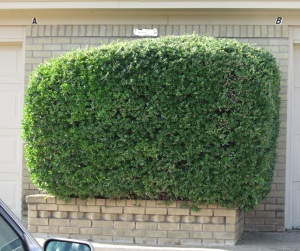 eats!) locust tree that could hit against the cable wire in a wind and cause problems. (In the flatlands, “wind” is air moving in excess of 20 mph.  Air that’s moving slower than that is classified as “light breeze.”) 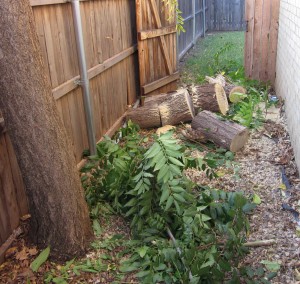 He located and stumpified the Siberian elm saplings in the mystery bush between the garages and winkled them out, then trimmed the thing back into submission so it looks very nice now.  Not as boxy as it should, but a lot better than it did.  And that decapitated trunk by the side of the house that had resprouted these wild wavy branches all over the place was cut down, cut up, and removed.  He made short work of it, and also “neatened” up the adjacent tree beside the fence. 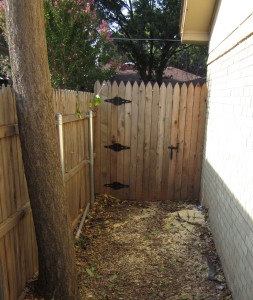 The tree trimming guy was a very nice, and quite large, Black man who sounded like he might have come from Jamaica.  Now, my mom, even on such brief acquaintance, would have found out his wife’s name, what she did, the names and ages of all his children and grandchildren (he was in his late 50’s), and would have gotten the skinny on how a Jamaican had ended 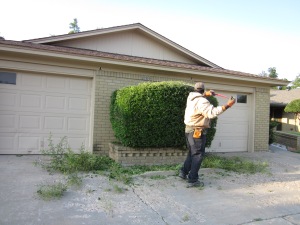 up on the flatlands of Texas, inside of about 10 minutes.  (I often think my mom missed her calling.  She would have made a crackerjack investigative reporter, or private investigator.)

Oh, and yesterday afternoon, after I had advised B that she might discover a large Black man with a little chainsaw on a pole in her back yard tomorrow (I didn’t know where he’d have to go to reach that pesky branch), we were standing on her porch talking about things and stuff, when a hummingbird came up and started in on her Turk’s Cap shrubs (Malvaviscus arboreus ) which is a species of hybiscus. I think it was a female/juvenile rufous hummer (Selasphorus rufus) but I wouldn’t swear to it.  Could have been a female or juvenile ruby-throated (Archilochus colubris).  Seeing a hummingbird never ceases to thrill and delight yrs trly.

So, the tumult and the shouting having died, the tree guy and the trimmings having departed, and the experience having been duly blogged about, I think I’m going to take my quarrelsome tum back to bed and see if both of us can catch up on some sleep.

2 thoughts on “A Rough Night and An Early Morning”