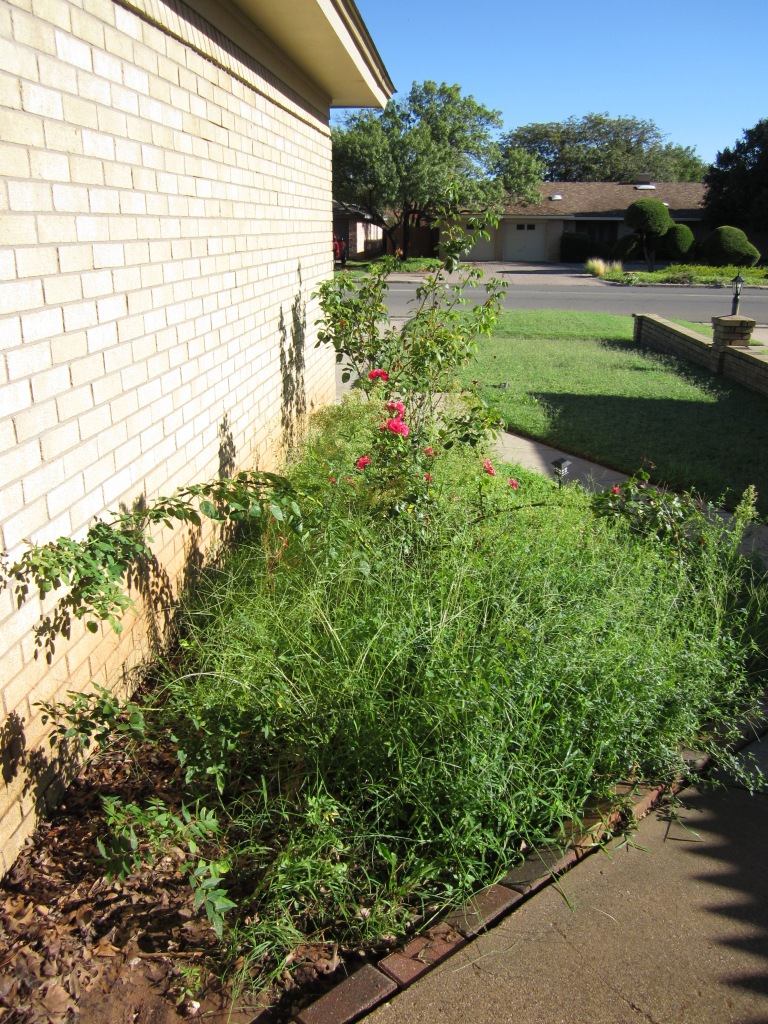 I really need to call the little Hispanic man and his wife to come fork and weed the flower bed, and ask him if he has a chainsaw. I’d rather pay him to do it and trickle down a little cash into the economy than try to tackle it myself. In the first place, I’d have to buy a garden fork because I don’t have one any more. (I sold all my yard tools when I moved into the apartment.)  In the second place, it’s too durn hot. (I can’t take the heat anymore like I used to could.)

Now, something like resetting the edging bricks, or laying down some pavers by the faucet, yes, that’s not out of reason, or planting some bedding plants, or even laying a bunch of mulch in the bed, which I may do if budgetary constraints allow — it would take about five or six bags to mulch that bed properly. Yeah, I could spread a thin layer over the surface and the weeds would be popping right back up to give me the raspberry. If you’re going to mulch properly for weed control, you need at least an inch.

I do have a volunteer rose bush. (How did the world know I like 3 of things better than I like 2 of things?)  Tea roses are very often grafted onto a root stock that is one of several varieties of very hardy climbing rose.  Typically what happens is the graft dies and it grows back out from the root stock.  That’s what’s happened to the red rose.  The “volunteer” rose bush is either the root stock off a bush whose graft died back to the ground, or else it’s a runner from the one next to it, but hey, roses is roses.

We did get a trickle or two of rain overnight.  I have a feeling we’re going to be getting more if some of those swirly storms get to horsing around in the Gulf (of Mexico).

It was sunny, and sparkly with dew/rain this morning when I went out to take the above pix.  The fat(cat)boy, who has been clingy since I took him to the vet for his shots was nervous because I wouldn’t let him out on the porch with me.  (He is strictly an indoor cat.  He never goes out of doors unless he’s in a carrier.) He is not taking to his diet well.  He whinges and whines when his bowl gets empty long about 3 o’clock, but he doesn’t get fed again until 6 pm.  I have been tossing him a pair of treats (Greenies, 1 cal. apiece) but I make him chase the first one all the way down the hallway into my bedroom, and just when he’s eaten that one, I get his attention and lay a second one at my feet so he has to run all the way back.

In the knitting news, I have four hats on the needles at the moment: 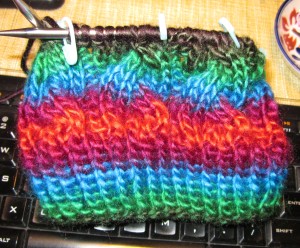 This one is a Fabled Cable hat — still working on the proportions of the ribbed bit, the cable bit and the top bit, so I haven’t posted the pattern yet. This one is using the Lion Brand Landscape yarn, in the color “Apple Orchard.”  I will say this for the Landscape self striping yarn:  The colors are very bright and have a high contrast value.

A bit garish for my tastes, but then, that’s what makes horse races.  Then I’ve got a Simple Pleasures hat going in the Red Heart Unforgettable in the color “Pearly” — which I’m not sure I have enough of to finish the hat.  I need to root around in my yarn box to see if I have any more of that color.  If not, I will use some of the delicious green shown, which is called “Meadow.”  The color palette of the Unforgettable yarn is much richer and more subtle than that of the Landscape.  Chacun, as they say . . .

Another Coriolis hat, with a leftward twist, because I like doing ssk’s better than I like doing k2tog’s.  Again, this is the Red Heart Unforgettable yarn, in the color “Dragonfly” which I like a lot.  The color choices in this blend remind me of the James Taylor song, “Sweet Baby James.”  Won’t you let me go down in my dreams . . .

Still working on this version of the Simple Pleasures hat in the Moda Dea Dream yarn.  I’ve got about another 1-1/2 inch to go before I start the decreases.

This is typical of me.  I work on one a while and get bored with it, and set it aside and work on another one.  The Simple Pleasures hats are stockinette once you’ve gotten the brim (either ribbed or hemmed) done, so they require no thought.  You have to pay attention to the other two, particularly the Fabled Cable to get your cable crosses right.

I’ve been listening to Kit Watkins all morning.  Very restful “floaty” music that is tranquil, melodic and somewhat minimalist.  Just right.  If you like his music, there’s a bunch that’s free for the downloading on the Internet Archive, which is where I got it.  You can find all kinds of stuff on the Internet Archive.  Give it a browse sometime when you’ve got an afternoon to kill.